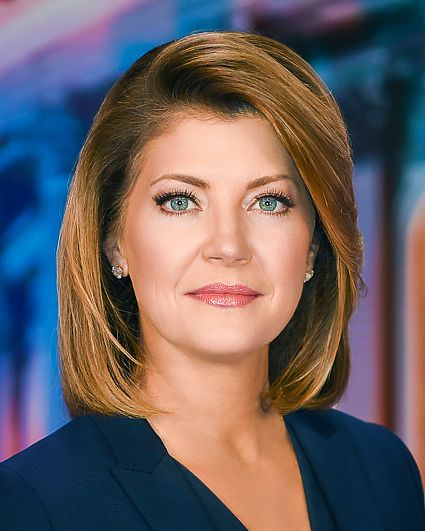 Host
Norah O'Donnell
Biography
Norah O'Donnell is the anchor and managing editor of the "CBS Evening News," anchor of CBS News Election Specials, including primary, debate and election nights, and a "60 Minutes" contributing correspondent. O'Donnell is a multiple Emmy Award-winning journalist with more than two decades of experience covering the biggest stories in the world and conducting impactful, newsmaking interviews. She has covered six presidential elections and traveled around the globe to interview some of the world's most important leaders, including six U.S. presidents.

Named anchor and managing editor of the "CBS Evening News with Norah O'Donnell" in 2019, O'Donnell leads CBS News' flagship broadcast from Washington, D.C., becoming the only network evening news anchor based in the nation's capital. Previously, O'Donnell was co-host of "CBS This Morning" and a contributor to 60 Minutes. O'Donnell joined "CBS This Morning" as a co-host in July 2012. Prior to that, she served as CBS News' chief White House correspondent covering the administration of President Barack Obama.

As the anchor of the "CBS Evening News," O'Donnell has conducted interviews with newsmakers in Washington and beyond, including President Joe Biden's first interview since taking office; an exclusive sit-down with Vice President Mike Pence on the killing of Iranian military commander Qasem Soleimani; an exclusive 60 Minutes interview with Dr. Rick Bright, the former top federal scientist following his whistleblower complaint about the Trump administration's response to the coronavirus; a live interview House Majority Leader Kevin McCarthy during the insurrection of the U.S. Capitol on Jan. 6, 2021; an exclusive interview with a former staffer for New York's Gov. Andrew Cuomo who alleged sexual harassment by the then-governor, and more. As anchor of the "CBS Evening News," O'Donnell also covered the historic first summit between President Joe Biden and Russia's President Vladimir Putin in Geneva, Switzerland; anchored live from Surfside, Fla., hours after a deadly beachfront condo building collapse; and interviewed Amazon founder Jeff Bezos and reported live from the Kennedy Space Center for the 40th anniversary of the Apollo 11 launch.

At CBS News, O'Donnell has sat down with some of the world's most influential leaders. In September 2019, O'Donnell spent a week reporting in Saudi Arabia for 60 MINUTES where she interviewed Crown Prince Mohammed bin Salman for his first interview following the murder of Jamal Khashoggi. She also interviewed MBS in 2018. O'Donnell is the only western television journalist to have interviewed the Saudi Crown Prince twice. She has also interviewed South Korean President Moon Jae-in; the Duke of Sussex Prince Harry; Nobel Peace Prize winner Malala Yousafzai; and the Dalai Lama. She also covered the historic election of Pope Francis in Vatican City, as well as his first Apostolic Voyage to the United States. She has reported from the scenes of Hurricanes Dorian and Harvey; reported and anchored from the country's largest migrant processing facility on the southern border; George Floyd's memorial services in Minneapolis and Texas; mass shootings in Las Vegas, Annapolis, Maryland, and El Paso, Texas; and the Boston Marathon bombing.

O'Donnell led CBS News' political coverage throughout the 2020 presidential election, the transition of presidential power, the new administration, and beyond. Over the course of the year, O'Donnell anchored CBS News' top-rated coverage of the impeachment proceedings against then-president Donald Trump, moderated CBS News' Democratic debate in Charleston, S.C., led CBS News' 2020 Election Day coverage until a winner was named, and more. O'Donnell has reported extensively on the U.S. military, including launching "Profiles in Service," a "CBS Evening News" series highlighting stories of veterans, members of the military and Americans from coast to coast who are giving back to their communities.

O'Donnell was awarded a prestigious 2022 duPont-Columbia Award and the Scripps Howard Award for Excellence in Broadcast National/International Coverage in 2021 for an exclusive, year-and-a-half long investigation into sexual assault in the U.S. military. This followed her Emmy-award winning reporting in 2018 on sexual assaults at the U.S. Air Force Academy. Her reporting on sexual assault at the Air Force Academy was also recognized by the prestigious White House Correspondents' Association.

Throughout the COVID-19 pandemic, O'Donnell spearheaded dogged reporting and offered compelling, newsmaking stories. Her work was recognized with two Headliner Awards. One in the Pandemic Coverage category for her exclusive interview with Dr. Rick Bright on the urgency of the unfolding COVID-19 crisis and how it was at odds with the administration's view that the contagion was far less serious. O'Donnell also received the Headliner Award in Business and Consumer Reporting for her 60 MINUTES report on the front lines of automotive industry factories for Ford and GM as they pivot from making cars to COVID-19 PPE and ventilators in a rapid changeover not seen since World War II.

O'Donnell and the "CBS Evening News" was recognized with an Edward R. Murrow Award for 'Best Newscast' for its on-the-ground and exclusive coverage from the U.S.-Mexico border, including O'Donnell gaining first access inside migrant detention centers and her interview with Homeland Security Secretary Kevin McAleenan.

O'Donnell received the prestigious Sigma Delta Chi Award for Breaking News Coverage for her contributions to CBS News' coverage of George Floyd and the forces of change. O'Donnell was part of the CBS News team that received an Alfred I. DuPont Award for the Network's coverage of the 2012 Newtown massacre. She has earned several Gracie Awards including being named Outstanding News Anchor in 2020 and Best National News On-Air Talent for the year 2018 and 2016. O'Donnell is a 2019 New York Women in Communications Matrix Award honoree. She also received the Edward R. Murrow Award for Best Newscast of 2017 and was named Broadcaster of the Year by the New York State Broadcasters Association in 2014. Additionally, O'Donnell was awarded the Merriman Smith Memorial Award for excellence in presidential news coverage for her exclusive 60 MINUTES interview with then-Vice President Joe Biden and his wife, Dr. Jill Biden, on his decision not to run for president in 2016.

Prior to joining CBS News, O'Donnell worked for more than a decade at NBC News, where she covered the Pentagon, Congress, and the White House. At NBC, she reported from the Pentagon on Sept. 11, 2001, and received a second Sigma Delta Chi Award for Breaking News Coverage for a Dateline NBC story titled "D.C. In Crisis." In the months following the attacks, she traveled extensively with then-Secretary of Defense Donald Rumsfeld, including on his first trip to Afghanistan following the terrorist attacks.

O'Donnell has covered every presidential election since 2000, including as NBC News' White House correspondent in 2004 when she covered the campaigns of then-President George W. Bush and Senator John Kerry. Prior to covering the White House, O'Donnell was NBC News congressional correspondent, reporting on the lead-up to the Iraq War. She began her career as a print reporter for Roll Call, a Capitol Hill newspaper, for which she covered the impeachment of President Bill Clinton and traveled the country covering congressional elections.

A firm believer in empowering women, O'Donnell sits on the board of directors of the International Women's Media Foundation. At the "CBS Evening News," O'Donnell also created and led a series of original reports called "Women and the Pandemic," which offered an in-depth look at COVID-19's long-lasting and disproportionate effect on women.

Born into a military family, O'Donnell grew up in San Antonio, Texas; Landstuhl, Germany; Seoul, South Korea and Washington, D.C. She is a graduate of Georgetown University and received a Bachelor of Arts in philosophy as well as a Master of Arts in liberal studies. She is married to Geoff Tracy, a restaurateur in Washington, D.C. They have three children.