If you ever join the Reagans for a potluck, you might endear yourself by bringing mashed potatoes. Just don't skimp on the butter. Family meals are a staple on the CBS drama Blue Bloods. Even if you've never missed one of their conversations, you've probably been craving a chance to try the food. Well, now you can with The Blue Bloods Cookbook: 120 Recipes That Will Bring Your Family to the Table. "We had a glazed ham for dinner once which inspired the one for the book," said Bridget Moynahan, who plays Erin Reagan on the show. "It was blend of sweet and salty. The glazed ham was irresistibly crispy. We could not stop picking the crispy bits off in between takes." 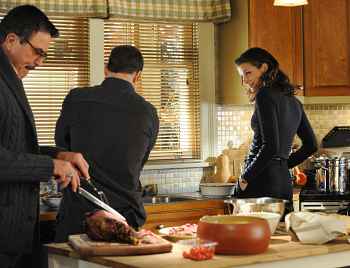 Plenty of culinary know-how came from Moynahan and Wendy Howard Goldberg (married to Blue Bloods' executive producer, Leonard Goldberg), who teamed up to write the book with Chris Peterson. ​They'd already been cooking together before deciding to collect their recipes for the book, along with ones from the show and the other actors. Among her fellow cast members, Moynahan says she's still looking forward to sharing the kitchen with Sami Gayle (Nicky Reagan-Boyle). "She likes to cook sweets. I tried to get her to come over and babysit and then do some baking with my son."

Speaking of dessert, you might notice a chocolate cake for Erin's 40th birthday coming up in Season 6. If it gets your mouth watering, you'll find the recipe in the book.

Moynahan also had to include her all-time favorite dish, a Swedish meatball recipe from her mom. No matter where they gathered, her family would always enjoy it on Christmas Eve. Her mom would prepare everything in advance at put it together when they arrived.

"Every cast member gave a recipe," explained Moynahan. "What's been nice about the cast is everyone's very different in the way they eat. Will is vegetarian. His recipe was completely different than everybody else's... it's much more of a meat-and-potatoes kind of cookbook. Tom Selleck's wife provided a recipe for Shepherd's Pie which was absolutely delicious. It's nice to see what everybody grew up on." The real-life family dishes pair perfectly with the ones enjoyed by their TV family, which often include heaping sides of green beans or mashed potatoes—a personal favorite of Moynahan's. "I like to make my mashed potatoes a little creamier and butterier than the ones we serve on the show," she said. "The more butter and cream the better. I've never met a potato I didn't like." 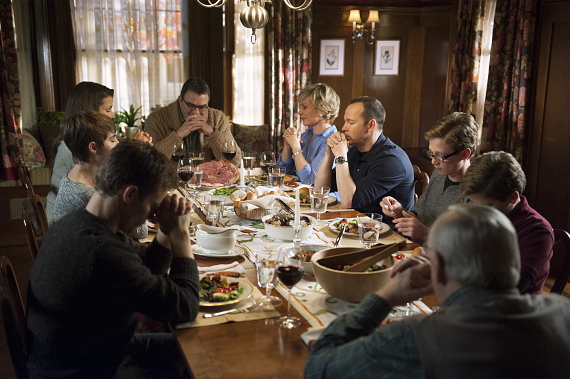